The Armeria Patria was founded in 1956 in Latina by the grandfather Bindo. Around the 70s his son Roberto accompanied by his wife Dobrilla took over the management of the company. From then until 1988, in addition to carrying out the sale of rifles, this activity also operated in the sector of loading cartridges for hunting and shooting with excellent results.

In the same year, at the end of the draft service, he became an integral part of the armory staff Giorgio, nephew of Bindo and son of Roberto and Dobrilla.
From 1988 onwards, thanks to Giorgio, new sales addresses were added, such as shooting with rifles and pistols. In 1993 the management of the armory passed completely to Giorgio, who decided to make a change. The business was completely restructured, adding new sales branches.
Giorgio decided to devote himself also to the loading of pistol cartridges, produced for the Italian market and also exported abroad (in all those countries where refilling is not allowed by law).

At the same time, thanks to the close friendship with Frank Garcia, he began to import, catalog and sell weapons and accessories from America for the new discipline "Dynamic Sports Shooting".

Today, the A.P.G. you can find all the best brands of weapons and accessories from the most varied continents. 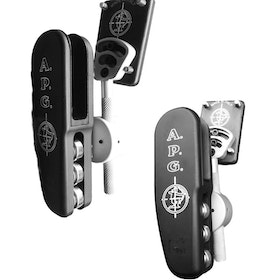